Temperance – its roots and what it means to us

Temperance: habitual moderation in action, thought or feeling, or restraint from the indulgence of appetites or passions.

The Temperance Movement was a social movement against the use of alcohol. It promoted complete abstinence and was a reaction to the excessive drinking of the 19th century, which was blamed for many of society’s ills, including immorality, poverty and the breakdown of family and the economy. The social reformers thought that alcohol had a lot to answer for!

Temperance societies started to come together in the 1830s to campaign against the consumption of alcohol and there were splinter groups to specifically target various demographics of drinkers. The Temperance Movement was largely aimed at the working class, as the evils of drinking were largely attributed to them.

Temperance was also supported by churches and other religious groups, and there were strong undertones of social control, and particularly the control of women. Temperance Halls were set up as meeting places, as a virtuous alternative to the public houses. You can still see the old Temperance Club entrance over a doorway in Wirksworth, just down the road from the Distillery! 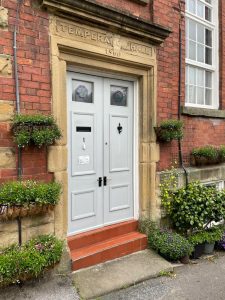 Although the temperance movement gained significant traction and became widespread at one point, it fizzled out after World War II.

Our own Temperance Member’s Club is a tongue-in-cheek reference to the Temperance Movement, but brings a community of people together to sip and enjoy our craft whisky, rather than campaign against it. Of course, we advocate drinking responsibly, and specifically drinking less and drinking better by choosing drinks mindfully and enjoying them slowly.

On September 11th, we’ll be hosting our third annual Temperance Club Day down at the Distillery. Our members can chat to our distilling team, taste the third limited edition Temperance Club bottling and collect their bottle to take home. This third bottling is particularly meaningful, as it’s the first time we’ve been able to call our liquid whisky (it’s previously been a one- or two-year-old single malt spirit). We’re really looking forward to sharing our whisky with our club members for the first time.

Our Temperance Club community will be the first group of people to try our whisky and this is one of the ways we thank our members for their support during the Distillery’s infancy. Although our Temperance Club membership is now closed, our whisky will be available to everybody soon – the best way to keep updated with details about the release is to join our mailing list. Sign up below.