The inspiration for our Shining Cliff Gins lies right behind our Distillery – the ancient woodland of Shining Cliff Woods – from the botanicals we’ve chosen to the bottle design.

We wanted to create a style of gin that reflects this beautiful location, and the woodland and hedgerows we pass every day. And some things were destined to be, such as rosehip, which was flourishing on the roof of our once dilapidated research & development bunker.

Our Original gin is made from 13 botanicals, which we vapour distill to capture all of the delicate flavours. The finished result is a complex yet perfectly balanced, smooth dry gin, with a wonderful floral nose. Our Shining Cliff gin range also includes Citrus, Spiced and Bakewell Pud. We also make some limited edition, seasonal bottlings of Riverside and Winter Gin.

The look and feel of our Shining Cliff Gin range is a reflection of the history and heritage of our unique location.  The old entrance sign to the woods has influenced the bespoke bottle lettering, and the Victorian flourishes on the label give it a sense of place, linking it to the Wire Works of the 19th century in which our gin is now made. 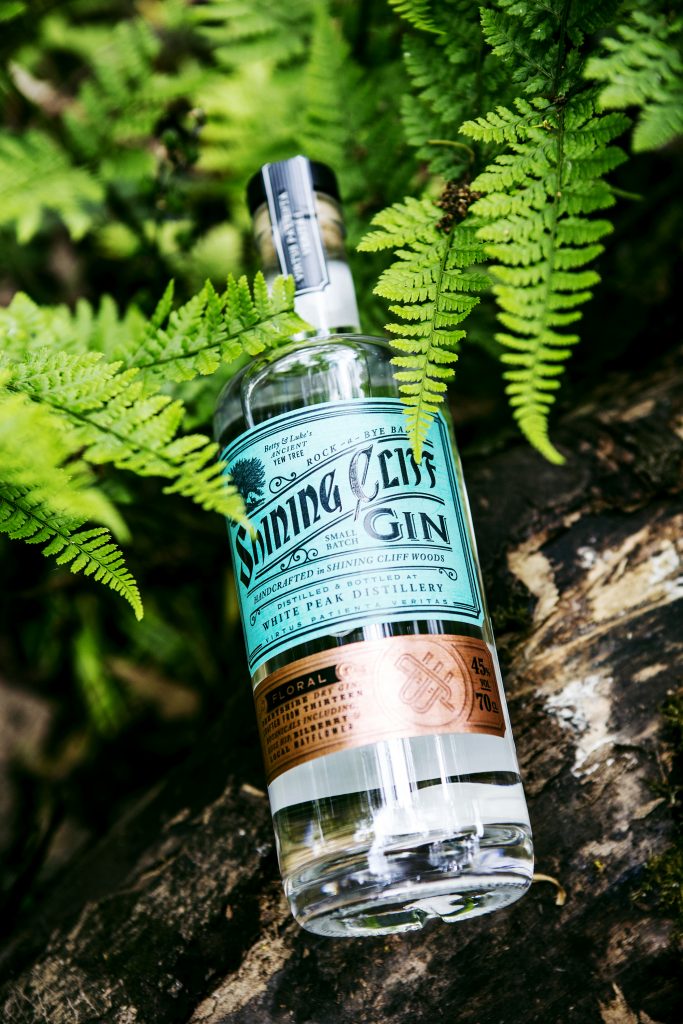 The illustrative wood carving of the ancient yew tree that features prominently on our gin bottles celebrates more of our local history. Luke and Betty Kenny were 17th century charcoal burners who lived and plied their craft in Shining Cliff Woods. They travelled each year from Papplewick to help with charcoal burning, and eventually stayed on permanently to live in the woods. They raised a family of eight children in the woods in their movable hut. Their favourite location was by the 2000 year old yew tree. As Betty worked, she laid her babes in the boughs of her favourite tree and sang her lullaby:

Sadly, the tree was damaged by fire in the 1930’s, but the remains can still be seen today for those wanting to explore the woods during a visit to the Distillery.