For the month of February, we’ve had a special mash on the go. Our first mashes using Derbyshire barley, which has been grown within 10 miles of the Distillery. This special batch of whisky is an extension of our Derbyshire provenance, and the full life cycle our whisky enjoys here at the Wire Works.

This barley has been floor-malted at Warminster, the oldest maltings in England. Warminster has been malting barley using traditional methods since 1855 and continue to use the same methods today.

The malt house is designed so that the barley undergoes a different process on each floor, before being transferred to the floor below for the next stage. It’s manual and time-intensive work for the maltsters.

Initially, the barley is steeped in water for three days to artificially start the germination process. Then, the malt descends to the germination floor, where it is spread out and then turned and ventilated regularly to maintain a slow rate of germination. The barley is known as green malt at this point.

After 4-5 days the grain has been modified, providing access to the starch within and producing the enzymes required to convert the starch to sugar in our mash tun. The malt is then transferred to a kiln where temperatures are controlled carefully over 16-18 hours, preventing any further loss of starch to the barley while preserving the enzymes for use during mashing.

The final step of the process is separating the dried rootlets from the malt grains, before the malt is sent out to distilleries, ready to be used in whisky production.

The Derbyshire barley we’re using is unpeated, so it will be a temporary departure from our core lightly peated expression.

It will be at least three years before we can release this unpeated whisky, but we’ve been sampling the new make at various cut points, and we’re already excited about this batch. We’re running fewer forehots (11 minutes instead of our usual 15) at the start of the spirit run, which adds some very fruity notes to the spirit (lots of banana).

We’re also running deeper into the distillation (down to 63% instead of our usual cut of 67%) which provides lots of malty biscuity notes. The flavour is distinctive and completely different to our lightly peated new make, and we’re intrigued to sample this spirit as it matures. 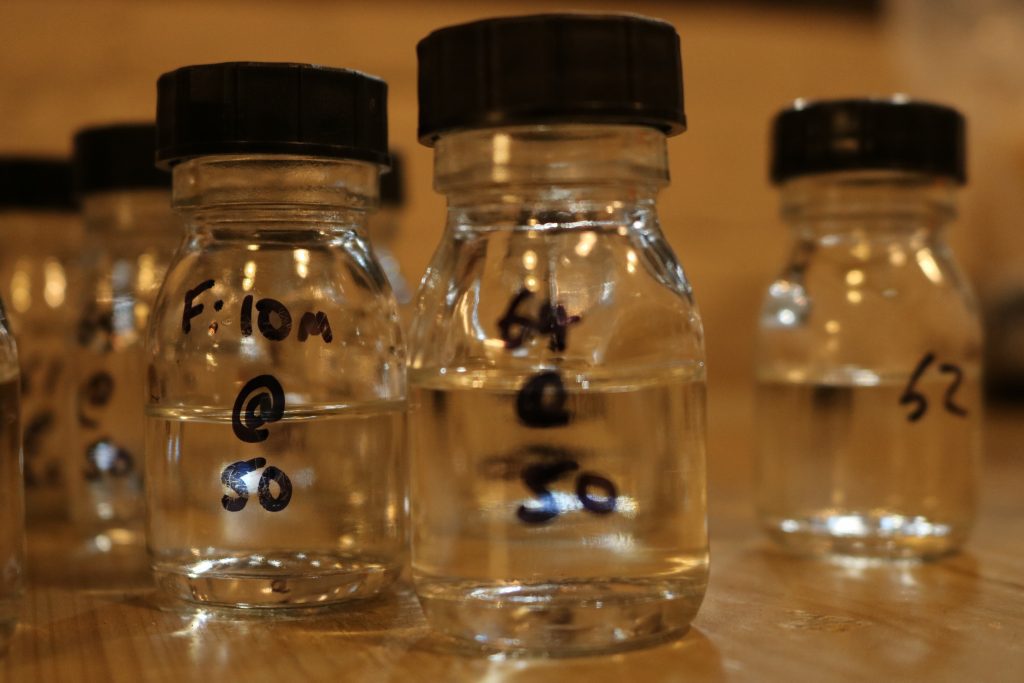 We’re filling a wide range of casks, to give us an understanding of which casks will suit the flavour profile of this Derbyshire barley; we’re leaning towards casks that favour a longer maturation, to preserve some of the malt flavour in the final whisky.

So far, we’ve filled some second-fill bourbons and STRs from the first release, some first-fill bourbons, and some virgin oak casks with a low level of charring. We’re also filling at different ABVs, to draw different flavours from the wood.